"Life is a state of consciousness." ~Emmet Fox 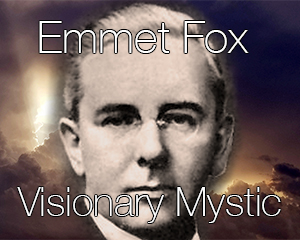 Emmet Fox (1886-1951) was born in Ireland, and was an important New Thought spiritual leader of the early 20th Century. He had a large influence on the founding of Alcoholics Anonymous. His writing, especially The Sermon on the Mount became popular in AA.

Fox taught that the foundation for all true productive expression was positive thinking. The technique involved having conscious awareness of our daily thought process and connectivity to God in order to realize any change or manifestation in the external environment. This concept was also taught by many mystics, including Rumi, Jesus, Buddha, Gandhi, and others from across all wisdom traditions.